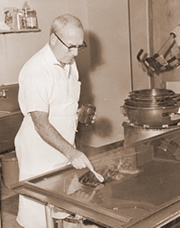 Sweenor’s Chocolates started modestly more than 60 years ago as a home business in Cranston, Rhode Island. Schoolteacher Walter Sweenor had learned the trade from his father, who was a candy maker in Springfield, Mass., in the early 1900s. Looking to make extra money during World War II, Walter Sweenor started creating the sweets in his basement kitchen and, in 1955, opened the first retail shop, “Sweenor’s Open Fire Candies” in Garden City, Rhode Island.

Walter's son Bill joined the business in the late 50's.  In 1979, along with his wife Claire, Bill opened a store in Wakefield, RI and moved the kitchen to Wakefield in 1983.  Son Brian joined the business in 1985 and is now the primary candy maker.  In 2005 daughter Lisa moved back to RI to run the day to day operations of the business.  Sweenor’s has continued to focus on quality, using only the finest ingredients – fresh cream, butter, honey and roasted nuts, a special blend of pure milk chocolate and dark chocolate, superior flavors and no preservatives. 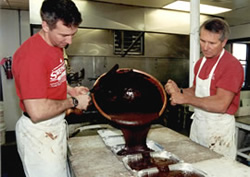 While the commitment to creating the best confections remains the same, the business has grown. Sweenor’s Chocolates is now Rhode Island’s largest chocolate manufacturer, and is well-known for its quality products.

Now in two Rhode Island locations and online, Sweenor’s Chocolates is owned and operated by the third- and fourth-generation confectioners. Bill Sweenor and his son Brian continue to create a wide assortment of treats by hand and Lisa Sweenor Dunham handles the business side of the company.

Sweenor's uses Peter's Chocolate in our confections.  Peter's is owned by The Cargill Corporation.  To read about Peter's sustainability efforts click here: